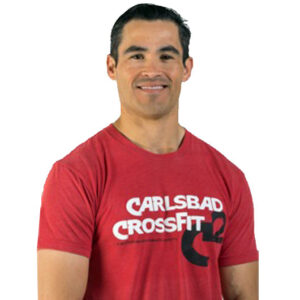 Tell us about yourself.
I grew up in Orange, CA. At 18 I joined the Marine Corps. After 13 years in the Marine Corps, I finished my BA in Sport Psychology at National University. I am currently a student at NU seeking an MA in Performance (Sport) Psychology.

How did you get into CrossFit?
In 2004, while stationed at overseas on Embassy duty, I stumbled upon CrossFit while searching for workout ideas. I was actually looking for pull-up programs and I stumbled upon an article from Clarence Bass that was reposted by CrossFit. At this point, I was only “dabbling” in a few CrossFit workouts. In 2005, inspired by a few other Marines in my detachment, while at an embassy in Pakistan, I decided to make CrossFit my training program.

How did you become a part of Carlsbad CrossFit (C2)?
I had expressed an interested in opening a CrossFit gym “one day” with my wife (then girlfriend) Lindsay.  Chris and Catina had shared a similar vision, and by March of 2012, we had opened Carlsbad CrossFit.

What made you decide to become a CrossFit coach?
I had been training in CrossFit since 2005. By 2007 I implemented CrossFit as part of our physical training regimen. I felt an obligation to those Marines to get credentialed, so in 2007 I attended my Level 1 Certificate course and CrossFit Olympic Weightlifting Course.

How has CrossFit benefited you beyond the gym?
Physically I believe I am in better shape now than my earlier Marine Corps days where my physical training routine consisted of running long distances and “bodybuilding” style routines. Although there was nothing wrong with the training routines I was on at the time, I believe they left serious holes in my fitness levels such as explosive power and strength in major compound lifts.

What else do you like to do in your free time?
What’s free time?

Come try our gym for free
and experience why we're different.
It's free, no pressure, no credit card needed.

We have a team of men and women
who are dedicated to your success.
Learn a little about them here